According to the CoreLogic home value index … 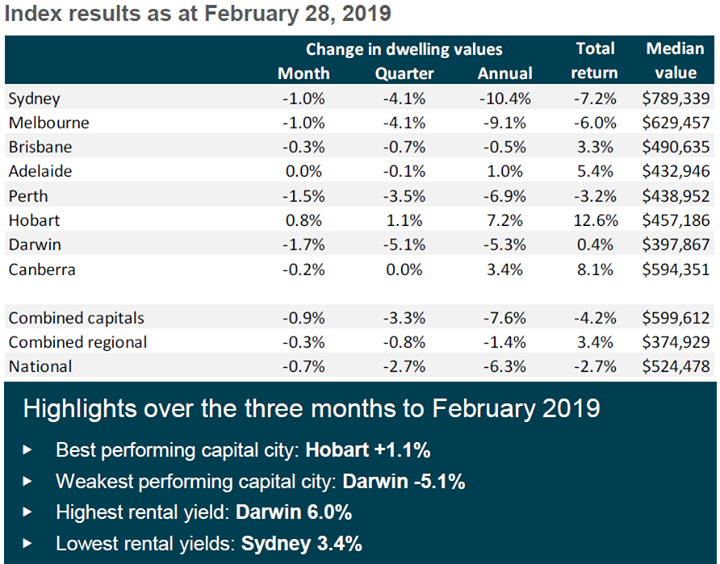 According to the CoreLogic home value index results released this month, the pace of declining property values eased slightly over February relative to the previous two months. However, housing values continued to trend lower with six of the eight capitals and four of the seven ‘rest of state’ markets recording a drop in values over the February.

Although home values have been falling for almost a year and a half, nationally dwelling values remain 18% higher than they were five years ago highlighting that most home owners remain in a strong equity position.

On a positive note, CoreLogic head of research Tim Lawless said, “The national rate of decline eased relative to January and December, when dwelling values were down by around 1%, however the February results remain overall weak, with the geographic scope of negative conditions broadening.”

Hobart (+1.1%) was the only capital city to record a rise in values over the past three months, while Canberra values were flat.

On an annual basis, only three of Australia’s eight capitals have recorded a rise in values over the past twelve months, led by Hobart where values were up 7.2%. Brisbane (-0.5%) now shows a negative annual change for the first time since 2012 and Sydney’s housing market moved into double digit annual declines for the first time since the early 1980’s. Mr Lawless said, “If Melbourne’s downturn continues at a similar pace we are likely to see the annual decline move into double digit falls over the coming months as well, with values currently 9.1% lower over the year.”

Both Perth and Darwin appear to have caught a second wind in the market downturn with the annual pace of decline previously improving but now worsening. This renewed downwards pressure on home values coincides with a softening in labour market conditions, with weaker housing market results likely compounded by credit scarcity.

Overall, Mr Lawless said, “The February housing market results marked a subtle improvement in the rate of decline, however the housing market downturn is now more widespread geographically and we aren’t seeing any indicators pointing to the market bottoming out just yet.”