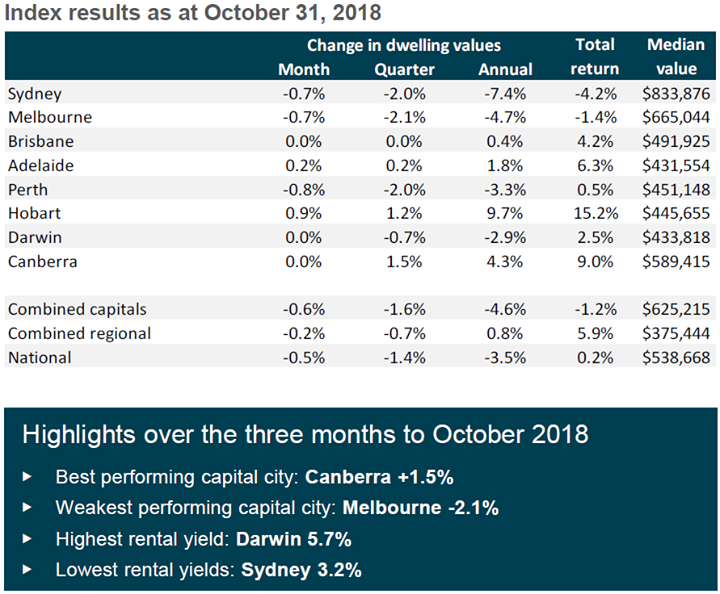 National Dwelling Values Continue To Trend Lower, Falling By Half A Percent In October.

Citing tighter credit conditions as a contributor to slower housing activity and lower dwelling values across Australia, CoreLogic head of research Tim Lawless said, “the latest results take the annual decline across the national index to 3.5%, signaling the weakest macro-housing market conditions since February 2012, with our hedonic home value index reporting a 0.5% fall in dwelling values nationally in October.”

On a rolling quarterly basis, dwelling values are now trending lower across both the combined capital city regions (-1.6%) as well as the combined regional areas of Australia (-0.7%). Mr Lawless said, “With such broad-based weakness in housing market conditions, it’s clear that tighter credit availability is acting as a drag on housing demand and impacting adversely on the performance of housing values across most areas of the country.”

The weakest conditions continue to be felt across Australia’s two largest cities where investment buyers have been the most concentrated, supply additions have been the highest and where housing affordability is the most stretched.

Gross rental yields are slowly recovering as dwelling values trend lower and rents edge higher, but remain well below their decade average of 4.31%.

A recovery in rental yields back to average levels is likely
to take some time, considering national rents have remained relatively flat over the year to date and are only 0.8% higher over the past twelve months.