National dwelling values were down for the … 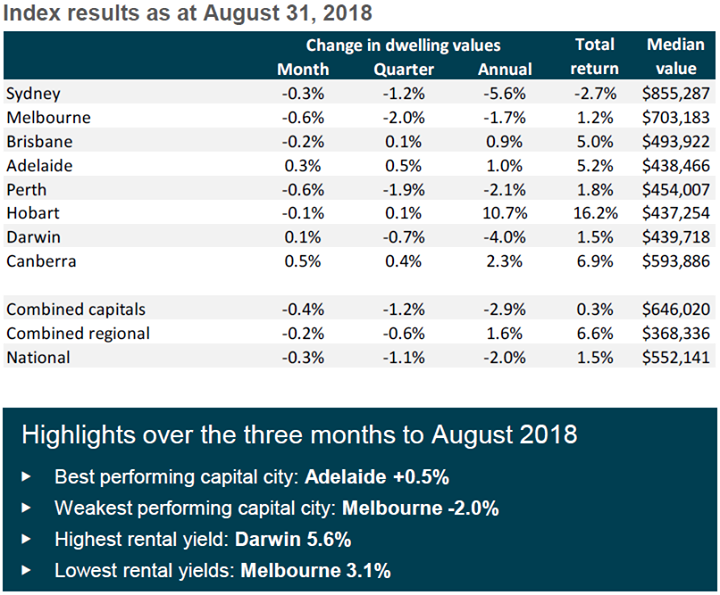 National dwelling values were down for the eleventh consecutive month suggesting spring selling conditions may deliver a challenge amidst rising advertised stock levels, tight credit and indications that mortgage rates are tracking higher.

Australia’s housing market correction continued through August with the CoreLogic National Home Value Index tracking 0.3% lower over the month. Since peaking in September last year, dwelling values have been consistently tracking lower, down a cumulative 2.2% through to the end of August.

CoreLogic head of research Tim Lawless said, “Weaker housing market conditions can be tied back to a variety of factors, foremost of which is the tighter credit environment which has slowed market activity, especially amongst investors. Fewer active buyers has led to higher inventory levels and reduced competition in the market. Collectively, these factors have been compounded by affordability challenges, reduced foreign investment and a rise in housing supply.”

Five of the eight capital cities recorded a fall in dwelling values over the month, highlighting the weak housing market conditions are broad-based. The only cities where dwelling values edged higher in August were Adelaide (0.3%), Darwin (0.1%) and Canberra (0.5%).

Adelaide rose to the top of the quarterly performance stakes over the three months to the end of August, taking over from Hobart where values have posted two consecutive months of subtle falls. Adelaide dwelling values were half a percent higher over the past three months, with quarterly gains also recorded in Canberra (+0.4%) as well as Hobart and Brisbane, both up +0.1%.

Over the year to date, the weakest housing market conditions are concentrated in Sydney and Melbourne where dwelling values were previously rising the fastest, but have now fallen 3.5% and 3.3% respectively over the first eight months of the year. Considering the sheer size of the cities; Sydney and Melbourne comprise approximately 60% of Australia’s housing market by value, and 40% by number, the weaker performance in these cities has a significant drag down effect on the combined capitals and national reading of the market.