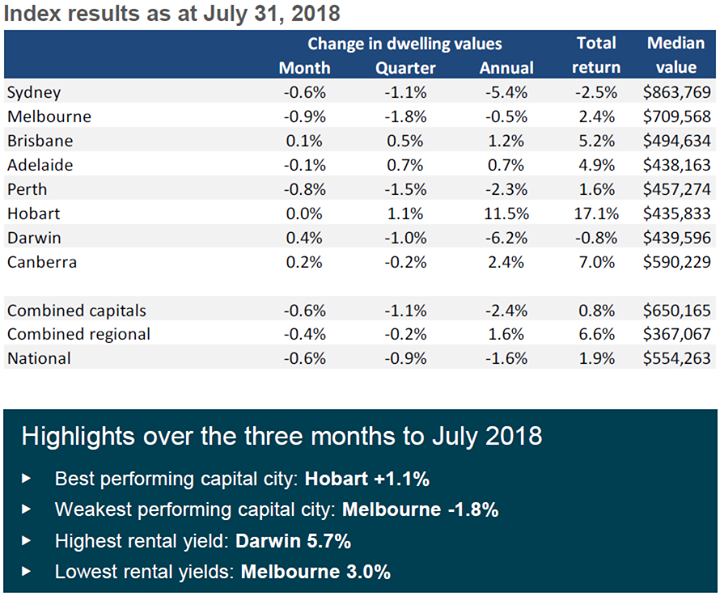 National dwelling values slipped 0.6% over the month to be down 0.9% over the rolling quarter & 1.6% lower over the past twelve months; the largest annual fall since August 2012.

Since peaking in September last year, the Australian housing market has recorded a cumulative 1.9% fall in value; a relatively mild downturn to date considering values remain 31% higher than they were five years ago. According to CoreLogic Head of Research Tim Lawless, the weakness in dwelling values is being driven by the long running declines in Perth & Darwin along with an acceleration in the rate of decline across Sydney & Melbourne & slowing growth rates across most of the remaining regions.

Across the capital cities, Melbourne has been leading the downturn, with the quarterly rate of decline outpacing Sydney since May this year. Melbourne dwelling values were down 1.8% over the past three months, followed by Perth (-1.5%) & Sydney (-1.1%). Melbourne’s decline phase commenced five months later than Sydney’s, with the market peaking in November last year. Since that time, Melbourne dwelling values have fallen by 2.9%, while in Sydney, where values peaked twelve months ago, the market is down 5.4%.

Those cities where values continue to trend higher have also seen a sharp reduction in their rate of capital gain. In Brisbane & Adelaide, where housing values were rising at a more sustainable pace over the past five years, the annual rate of capital gains has weakened. In Brisbane, the annual rate of growth has eased from 2.9% a year ago to 1.2% over the past twelve months & in Adelaide the annual growth rate has dropped from 5.4% a year ago to just 0.7% over the most recent twelve month period.

Even the Hobart market, where the annual pace of capital gains has held in double digit growth territory since January 2017, is starting to slow down.

The premium end of the market has seen a more substantial decline.

Despite the reduction in dwelling values in Sydney & Melbourne, housing affordability remains a pressing issue in these cities.

Sydney & Melbourne have recorded the most substantial concentration of investment activity relative to other cities.

Rental market conditions eased further in July, with rents falling 0.2% over the month to be only 1.6% higher over the year.