What Are The Best Performing Markets Over The … 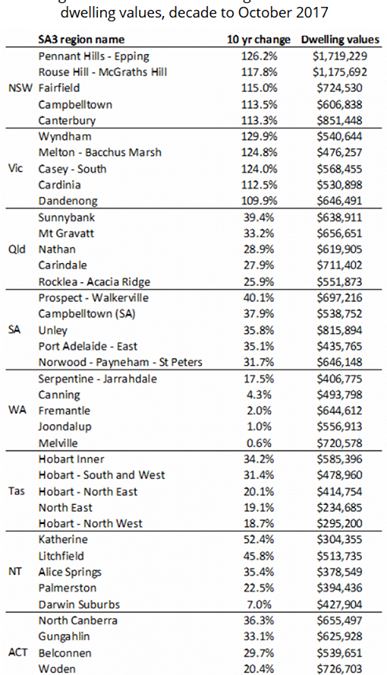 What Are The Best Performing Markets Over The Decade?

Sydney and Melbourne regions have experienced the strongest value growth over the past decade while the other capital cities have generally seen comparatively moderate value increases.

The CoreLogic Home Value Index data is available at geographic aggregations smaller than just the capital city and states. Here are the SA3 regions across the country that have seen the greatest increase in values over the past decade. For the analysis they have only included SA3 regions that had an estimated residential population of more than 20,000 as at June 2016.

The region nationally that has recorded the greatest increase in dwelling values over the past decade is Wyndham in Melbourne where values are 129.9% higher. Wyndham is an outer south-western region of Melbourne which has seen substantial new housing development occur over the past decade. The region with the second highest rate of value growth has been Pennant Hills – Epping located in the Hills District of Sydney.

When analysing the regions with the greatest value increases, the top 10 regions nationally are all located in either Sydney or Melbourne while Katherine in the Northern Territory is the only region outside of NSW or Vic to have recorded value growth in excess of 50% (52.4%) over the past decade. This highlights how much stronger value growth has been in Sydney and Melbourne relative to other capital cities over the past decade. 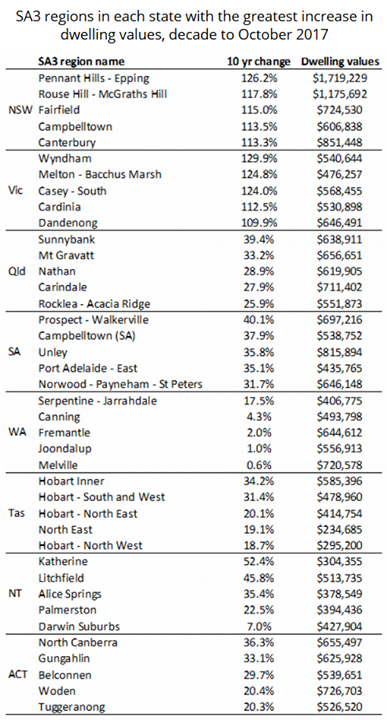