Data recently released by the ABS shows that … 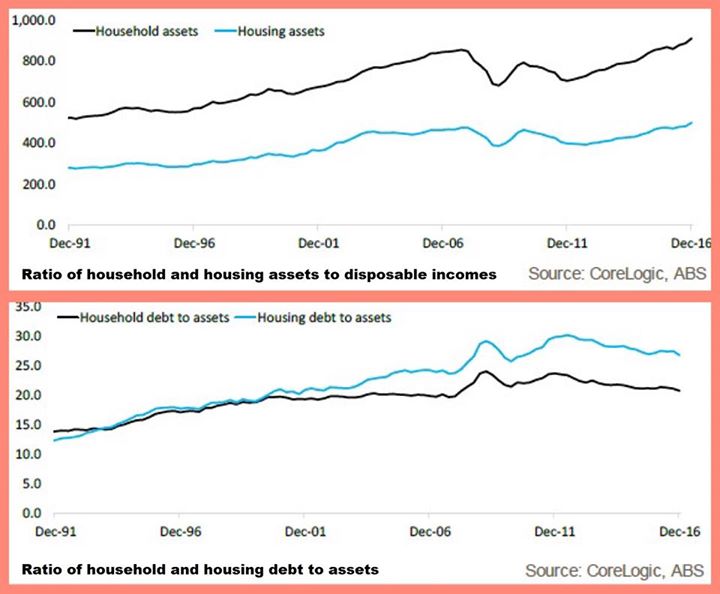 Data recently released by the ABS shows that household net worth has increased substantially over recent years however, household debt is also climbing to new record highs.

The ABS’ recent release on finance and wealth for the December 2016 quarter showed that the net worth of Australian households was $9.405 trillion. Residential land and dwellings accounts for 52.2% of total household assets.

At the end of 2016, the ratio of household debt to disposable income was recorded at 188.7%, the highest on record.

Although household and housing debt is at an historic high level, the value of the assets that this debt is held against is also higher than it has ever been.

Overall household debt is higher than it has ever been and although asset values are also at a record high, there remains concerns about how healthy it is to have such high levels of private debt. Furthermore, high debt, particularly for recent purchasers of residential properties, creates risks in the event of a housing market downturn which could see home owners enter into a period of negative equity. Especially with the heightened level of investor purchasing recently, investors have demonstrated a greater willingness to sell at a loss because that loss can be offset against future gains. Those that own owner occupied property do not enjoy a similar ability to offset these losses and are potentially much more financially vulnerable in the event of a housing market downturn. The high level of household debt is also expected to limit the ability for the RBA to lift interest rates suggesting that a neutral cash rate setting will be lower than it has been in the past.