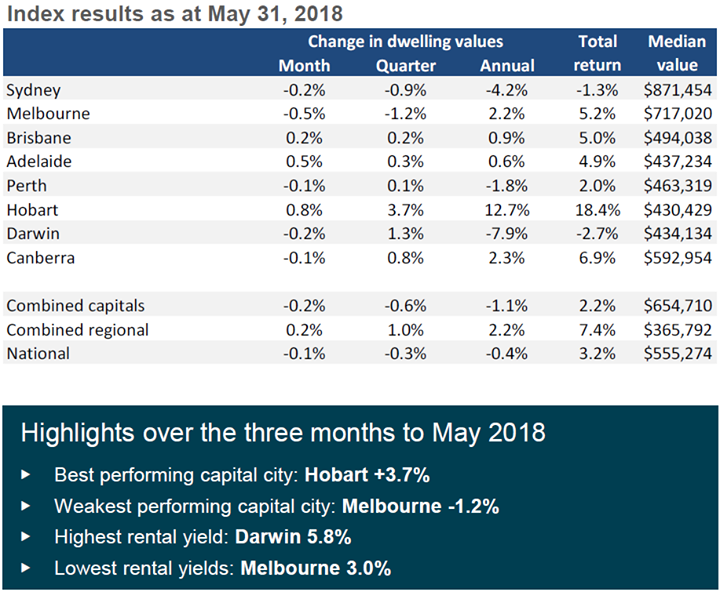 The May CoreLogic home value index confirm that national dwelling values dipped by 0.1% over the month, fueled by weaker conditions in Melbourne and Sydney, and taking the annual change into negative territory for the first time since October 2012.

In a sign the housing market downturn is becoming more entrenched, May marked the eighth consecutive month-on-month fall since the national market peaked in September last year, taking the cumulative fall in dwelling values to 1.1% through to the end of May 2018.

Commenting on the May results, CoreLogic head of research Tim Lawless said, “The negative headline growth rate is a symptom of weakening housing conditions across the capital cities, led by Melbourne and Sydney where previously, capital gains were nation-leading. Sydney and Melbourne comprise approximately 60% of Australia’s housing market by value, and 40% by number, so the performance of these two cities has a larger effect on the headline market performance.”.

While dwelling values are trending lower, weekly rents are rising, albeit at a generally sluggish pace. Nationally, dwelling rents were 0.1% higher over the month and 1.9% higher over the past twelve months. Despite the slow pace of rental growth, most capital city markets are seeing rents rise faster than dwelling values which is placing some upwards pressure on rental yields after a long period of yield compression.