Results as at July 31 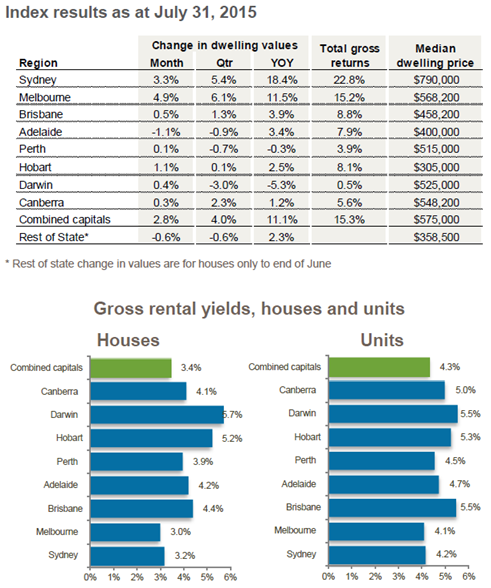 Melbourne and Sydney continued to set a rapid pace for capital gains in July, Adelaide was down slightly in the last quarter but still up year-on-year.

While dwelling values continue to rise across most cities, the pace of rental growth has slipped to a new record low, which has caused further compression of rental yields.

On a city by city basis, record low gross rental yields are evident for Sydney houses (3.2 per cent) and Melbourne houses (3.0 per cent) while unit dwellings in the same cities are only a few basis points away from new record lows. Tim Lawless, CoreLogic RP Data’s head of research, noted that these are also the cities where investors are most active, indicating the low yield profile hasn’t been enough disincentive to keep investment at bay in these markets.

Mr Lawless said, “The combined effect of tighter lending parameters with more focus on serviceability and low LVR’s, potentially higher mortgage rates for investment loans as well as limitations on the pace of investment lending imposed by APRA on Australia’s banks should conspire to slow investor demand in the market. Add to this the growing concern about the Sydney and Melbourne housing markets being overheated and the record low rental yields and the outlook being painted for investment is likely to be one of diminishing demand,”.